Configuration of the machine electrical system 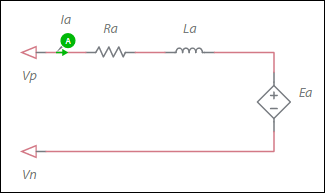 The generated electromagnetic torque is:

Some datasheets may not explicitly state the static parameters Ke, Kt, and Ra but these parameters may easily be derived from stated data.

The static torque-speed curve for a linear DC machine, as represented by this model, is a downward sloping line, described by the following equation:

Vt = terminal voltage applied to the machine
ωm = speed in rad/s
T = generated torque in Nm
Ra = armature resistance
Ke and Kt are the speed and torque constants which are usually equal in value.

Datasheets often provide operating points such as no-load speed, stall torque, and rated speed/torque conditions, all of which, by definition, lie on the torque-speed curve. Therefore it is a matter of solving for the unknowns in the torque-speed equation.

Using the no-load speed, ωo, Ke may be calculated as: