Most circuits contain non-linear elements such as diodes and transistors. To solve the non-linear set of equations formed by these elements, the simulator uses an iterative method called Newton-Raphson. The method involves successively linearizing and solving the circuit until the differences in the solutions between successive iterations become sufficiently small, a condition referred to as convergence. The Newton-Raphson method is used by all analyses.

To learn more about how the Newton-Raphson method works, refer to the Linearization section of Analog simulation.

These are located in the right properties pane under Simulator Options. 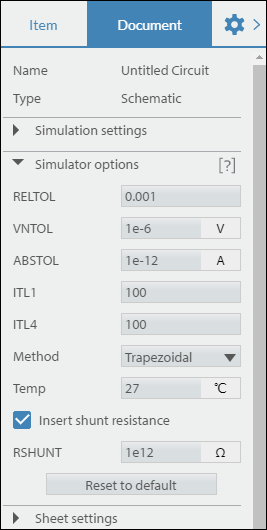 Apply the suggested values sequentially in the order shown, re-simulating as you apply each individual one.