In the case of electrical domain, these two variables are voltage and current.

The mechanical components in Multisim are modeled by machines.

The following depicts the important elements inside an arbitrary machine model. Each model contains an electrical and a mechanical sub-system. 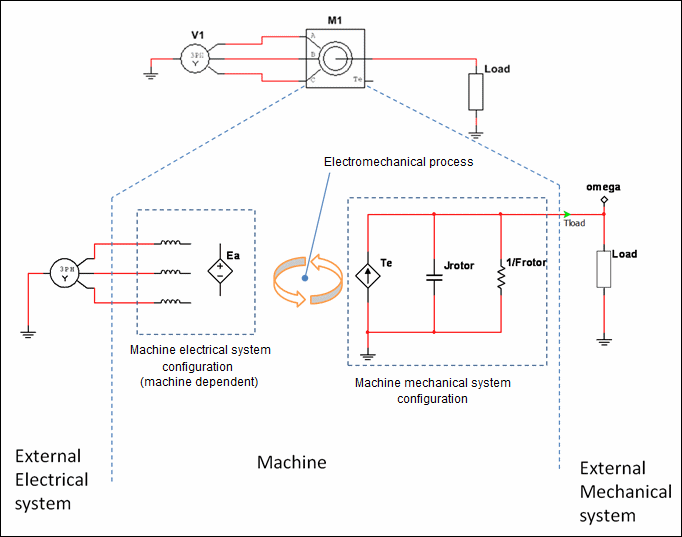 The output pin connecting the machine to the external mechanical system represents the machine rotor or shaft. The voltage on this pin represents the angular speed of the rotor. The torque consumed or produced by any element is measured as the current through that element.

Remember that through the electromechanical process (which is dictated by Faraday's laws of induction), the electrical system state is dependent on the mechanical system state. For example, for a simple DC motor model, the faster the shaft spins the larger the back-EMF voltage that counteracts the induced current in the windings. Another example is an induction motor, where the effective inductances are a function of the rotor position.

The actual value of Te is dependent on the state and type of machine that is generating this torque.

All machines have measurement pins that indicate various dynamic variables such as generated electromagnetic torque, shaft angle, and flux linkage. The value of these measurements is read as a voltage directly at the pin.